The Lovers card of the tarot is a complex and nuanced archetype with the potential for profound healing, autonomy and self-love.  Traditional imagery and interpretation, however, can impart a flat, single-faceted meaning to the card. By understanding the full spectrum of this card’s significance, we can gain a better sense of what The Lovers indicates when it comes up in a tarot reading.  We can also use the energy of this beautiful, powerful archetype for healing in magical practice.

For those who are new to divination and the Craft, the Tarot is a deck of 78 cards, each with a symbolic image and highly nuanced meaning accompanying it.  The cards can be drawn singularly or in multi-card layouts, called “spreads,” and interpreted to gain a better understanding of the influences and energies informing one’s situation, mindset, relationship dynamics, etc.

The Lovers is the sixth card in the major arcana.  The card corresponds to Gemini, the zodiac sign of mutable Air, which carries the qualities of communication, intellect and duality.  As such, the imagery of The Lovers reflects the duality within a union. In the Rider-Waite tarot deck, The Lovers card shows a man and woman, a heterosexual incarnation of a romantic union as well as the binary of feminine and masculine energies.*  (Please see note at the end of the article)

The couple stands in a fertile landscape, reflective of their primal sexual connection and potential to grow together.  Their nudity indicates mutual trust, honesty and openness. They have nothing to hide from each other and are comfortable being vulnerable with one another.  The couple stands beneath an angelic figure, who many consider to be Raphael, the angel of physical and emotional healing, and who blesses the couple’s union as Divine.  Behind the woman is the tree of life, present in the Christian lore of the Garden of Eden, accompanied by the serpent and apple that Eve is said to have eaten from. Behind the man are the fires of passion, also considered to be the forces of the zodiac signs as there are twelve of them.  These images behind each individual are traditionally seen as “temptations” that may draw the couple away from each other. As the Tarot is highly interpretive, however, many of these symbols and concepts can be read and re-evaluated toward a more inclusive and holistic perspective.

The traditional meanings of The Lovers lean toward romantic and sexual love stemming from a union between two people.  These interpretations include harmony in a relationship, an alignment of values between partners, commitment, and a sense of completeness due to a “soulmate” union.  This bond is one of open communication, of each partner complementing the other, and of profound emotional connection within a relationship. 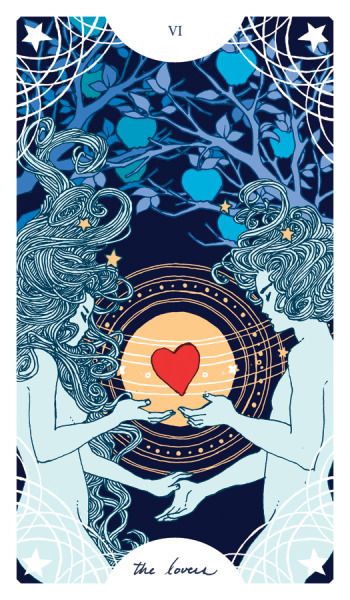 The traditional interpretations offer a (limited) level of nuance as well.  They expand to include being true to one’s own values, making choices in alignment with one’s values and identity, and acknowledging individuality within a relationship.  Some sources encourage self-reflection of discerning what “love” means to the individual and determining one’s own values. 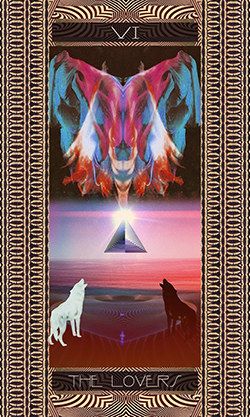 Joie Grandbois, my good friend, fellow witch, and tarot reader of over 30 years, offers an alternate perspective on the Lovers which prioritizes self-love, individual evolution and pursuit of one’s passion:

There are many who assume that The Lovers represents a romantic partnership, but…the Lovers, [as] a major arcana card, represents a very different kind of love.   The Lovers represents the “thing” that completes you in a way nothing else does: your higher calling or purpose. It is the ‘why’ of your being. When you discover that, and you follow it, there is a rightness to it that you feel deep in your soul.  Following that calling is not always easy; we often fight against it because we try to follow the path of what everyone else tells us we should be doing. We might even feel selfish for pursuing the very thing that completes us.

But it is in feeding ourselves, in finding the joy [in which] we are meant to live, that we are best able to serve others.  A person who is whole, who is fulfilled, [and] who loves themselves is able to give to the world in a way others may be unable to because they are able to do so freely.  Their value is not based on how their gift is accepted. [The Lovers] is a powerful card, and often comes up when someone is facing the decision of whether not to follow a calling or questioning if they have one.  It is a card that requires listening deeply to one’s own heart.

According to Joie’s perspective, our true “wholeness” and completion lies not in a romantic relationship with someone else, but by discovering and pursuing the passion that fulfills us.  Equipped with this interpretation, we can see the couple not as two people who are dependent on each other, but as the facets of ourselves that make us whole. Perhaps we could see the twelve zodiacal fires as the varying energies of our passion, as we all have the entire zodiac in our natal charts.  The serpent in the tree, rather than symbolizing disobedience and sin as in Christian lore, could stand for the serpent of wisdom and liberation, as it does in so many other cultures (Lilith as the serpent liberating Eve from the patriarchy, the Kundalini serpent, and the Ouroboros, to name a few). Instead of considering these influences as harmful temptations, one could see them as an individual’s assets of wisdom and passion, which will aid them in their journey toward personal fulfillment.

The Lovers calls on us to find fulfillment within ourselves and to pursue our passions.  While it depicts very traditional imagery of a romantic union, a nuanced interpretation indicates that this “union” is between an individual and their calling: the receptive and the assertive; the union of “being” and “doing.”  The Lovers is a powerful card of a different kind of love, which compels the querent to understand their own sense of self-love and nurture their individual journey toward self-fulfillment.

*Note: While the Rider-Waite tarot deck is the most well-known deck and thus the deck I chose to use as a reference for the imagery of The Lovers, it absolutely exemplifies a heteronormative, cis-normative and binary view of relationships and gender.  This blog post is written to prioritize the meaning of The Lovers as a card about self-love and individuality, but it’s still important to acknowledge the limiting and exclusionary nature of the way the Rider-Waite card represents a romantic union. As we know, a relationship is definitely not only defined as one cis-man and one cis-woman, and the terms “masculine energy” and “feminine energy” do not correspond to only men and women, respectively.  Ultimately, the message of The Lovers is the balance of energies, independent of sexual orientation or gender identity, regardless of whether one interprets these energies as within oneself or within a relationship. Additionally, there are multitudes of amazing and inclusive tarot decks such as the Slow Holler tarot, the Tarot of the Silicon Dawn, and the Dust II Onyx deck. Asali Earthwork (https://www.asaliearthwork.com/tarot-of-the-qtpoc/) and Little Red Tarot (https://littleredtarot.com/product-tag/queer-feminist/) both have great resources for queer and feminist tarot decks.

Hello loves!  My name is Gwen and I am the Head Witch, author and owner of The Love Witch sexuality and spirituality blog.

I am a sex educator based in Portland, Maine.  I work with folks of all ages, stages, identities, desires and abilities, and I support them in pursuing their personal fulfillment in sexual pleasure and health.

I am also a witch, practicing as a solitary as well as in the Corvid sub Rosa coven and the Witches of Downeast.  My path includes influences of Wicca, Heathenry and Celtic Reconstructionism, though I am always evolving and metamorphosing within my personal practice.  I am a devotee of The Morrígan, of Freya, and of Saturn.  I frequently connect with Venus as well as a melange of other deities that call to me from time to time.  My Craft includes reading tarot and runes, astrology, lunar magic, herbal magic and crystal healing.

I started this blog as an educational and creative outlet, and as a space to combine and integrate my identities as a sex educator and spiritual devotee, and to establish myself as an individual separate from my workplace.  As a recent college graduate with a B.A. in Women’s Studies and a minor in Holistic and Integrative Health, and as a feminist, sex-positive witch, I believe that sexual autonomy and spiritual practice are inextricably connected and equally important for attaining full personal sovereignty and fulfillment.  My vision is to create a unique, interactive and ever-evolving space to understand and embrace these two integral facets of human experience. Welcome to the journey!

How do you play? ✦ Dance intuitively, letting your body sway and flow, loving how you move without judgment ✦ Discover your body and your Self, with touch, toys, solo or partnered ✦ Color, draw, hula hoop; whatever you enjoyed when you were younger ✦ Explore or expand your B D S M practice: in the words of @planetmidori , “B D S M is childlike joyous play with adult s*xual privilege” The world is a scary place right now. Incorporating play into our lives, whether s*xual or platonic, is like a big hug for our nervous systems and our hearts. xoxo
Missing days in the forests and fields, mourning the loss of Beltane maypole dances this year, and sending my love to everyone grieving in their own ways right now 🖤
This has been on my mind for a while now, and I think we need tarot’s guidance, wisdom and introspection now more than ever. ✦ Beginners, intermediates, aspiring professionals, and folks who just want to get more out of receiving readings: all are welcome 🖤 ✦ We’ll be discussing astrology, numerology, herbal magic correspondences, intuition, ethics and more. ✦ DM me to register - I accept Venmo and PayPal, and if cost is prohibitive for you, just let me know 🖤 ✦ We all need a balance of community connection and deeper understanding of ourselves, and I hope to nurture that with as many of you as possible. See you on Saturday! xoxo
A little logo business for y’all 🐍 thank you @crownorbit for your incredible eye for color and creativity 🖤 aaaaand a surprise announcement for you tomorrow... xoxo
(bare) intuition, introspection, shadow work independence, individuality, reconnecting, recalibrating raw, primal, sensation, sensuality radical rest and intentional action into the void 𓆙 (sacred cycles: today and one year ago in AZ)
I love you 💜 We’ve all been hit hard in multiple ways by COVID-19. Now, more than ever, I think tarot needs to be as accessible as possible. As such, I’ve made a few changes to our regularly-scheduled programming: ✦ I’m taking 30% off my rates for folks who would like private readings. ✦ I’m also offering a donation-based “tarot clinic” on Instagram Live, where folks can tune in and ask for a one-card reading, and donate if/what they can. Let me know what day/time would work best for you, so I can connect with as many of you as possible 💕 due to the nature of IG live, this event won’t be confidential, but it’s an opportunity to get some guidance, insight and affirmation at whatever donation works for you. ✦ Finally, I’m holding a Tarot 101 workshop via Zoom ☺️ I haven’t decided on a date yet, so reach out to me if you wanna come and let me know when works for you. ✦ Thank you to everyone who entered the giveaway, and congrats to our winner, @deenallie.adventures 💜 I love you all so much, and I want to make sure I’m here for every single one of you as much as possible. Community healing is one of the many responsibilities of the witch, and these are just a few ways I hope to extend that healing to you all. xoxo